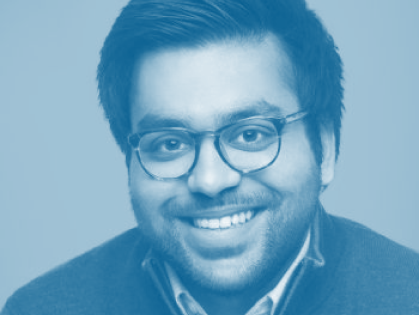 The EVCA leadership is dedicated to building community across and empowering the next generation of venture capitalists through an array of activities—from hosting events, knowledge sharing, and connecting others. This EVCA Leadership Spotlight Series is intended to help the broader community get to know what's going on behind the scenes at the EVCA, as well as highlight the valuable contributions of those individuals who make the EVCA possible. Accordingly, it's a great privilege for us to announce this EVCA Leadership Spotlight on our very own EVCA Board Member, Kartik Gupta.

Kartik Gupta is an investor at Salesforce Ventures, the venture capital arm of Salesforce that invests in the leading enterprise SaaS startups across the world. Before joining Salesforce Ventures, Kartik was at Industry Ventures working on primary and secondary deals across the venture landscape. He graduated from UC Berkeley, having studied Economics, Statistics, and Computer Science, along with having spent quite a bit of time working with various tech startups and angel investors in the valley. While originally from India, Kartik spent the last 8 years in Silicon Valley and at the end of 2020, moved to London. Lastly, he spends his free time playing sports, watching TV, and sailing.

EVCA: What do you do in your role as Board Member at EVCA?

Kartik: As part of the Board at EVCA, my goal, along with others’, is to help continue building the amazing community that we have today and see what more we could be doing. To that extent, one of the goals this year is to help expand EVCA outside the USA by bridging the gap between young VCs across the world. I’m looking to start the London chapter shortly, followed thereafter with Paris, Tel Aviv, and then other ecosystems across Europe. This is a pretty interesting and topical task given how the European ecosystem has risen to the world stage in 2020.

Kartik:  I joined EVCA in the early days and it was a super helpful organization as I was still fairly new to venture and my network was fairly limited. Through EVCA, I ended up meeting so many brilliant people who I could learn from and connect with, many of whom ended up becoming some of my closest friends. Now, having spent quite a bit of time in venture and in EVCA, I do think that there’s a lot more we can do to help while building this awesome global young VC community - some of the things being - bringing in more investors from all different backgrounds from across the US and the globe. This was a driving factor for taking up a leadership role.

Kartik: I don’t think I have any contrarian views that come to come at this point. However, one more general belief is that venture in 10 years is going to look very different than the last 10-20 years. Historically, most of the innovation has mainly been centered around Silicon Valley where you eventually had to relocate the HQ to SF to make it big. But as the rest of the world comes online, I believe that a significant part of the success will come from outside the US and that some of the best investments of the 2020 decade will be made in LatAm, Africa, and India/SEA. These economies have amazing talent that is widely available, have populations of massive sizes and fast-growing GDPs, and are structured such that they are going to skip the 3rd Industrial revolution and go straight to the more connected era without the legacy infrastructure slowing down the 1st world countries of today.