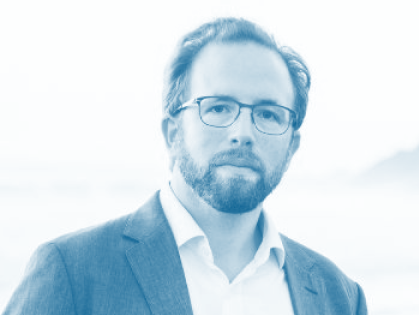 Alex Lazarow, who is Director at the venture fund Cathay Innovation, is someone who breaks the Silicon Valley venture capitalist stereotype: evermore than his professional title, he’s a sincere, kind, and humble intellectual who cares deeply about the world.  A conversation with Alex is never small talk. From the over two years I've known him, our discussions have covered everything from the typical venture capital deal talk, the must-see destinations in Portland, to some of our favorite mythical gods in Greek mythology. As you can imagine, talking to Alex is never boring. Naturally, it was an absolute privilege to interview him for this EVCA spotlight about the publication of Alex's new book, Out-Innovate: How Global Entrepreneurs--from Delhi to Detroit--Are Rewriting the Rules of Silicon Valley.

In Out-Innovate, published by the Harvard Business Review, Alex provides an instructive playbook about what it takes to build a startup in the “frontier” startup ecosystems outside of Silicon Valley. Based on over 200 interviews Alex conducted with global founders, Out-Innovate offers a refreshing and thought-provoking examination of how startups  across the world innovate and grow, challenging the typical Silicon Valley conceptions of what it takes to succeed as a startup. Out-Innovate was named a “Top Book To Inform Your Technology and Innovation Strategy” by Forbes and was the #1 release in Venture Capital on Amazon. It’s certainly one of our top business books of the year for the EVCA community.

EVCA:  What inspired you to write your book?

Alex:  By day, I'm a venture capitalist. I work for a fund called Cathay Innovation that invests around the world--in Asia, Europe, North America, Sub Saharan Africa. Outside of work, I've been teaching entrepreneurship with the Middlebury Institute for International Studies, which is the graduate arm of Middlebury College. I was getting frustrated that in both those cases, I was having conversations with entrepreneurs or would-be entrepreneurs about their strategies, and that everything that existed in terms of knowledge on how to successfully scale, survive, and succeed around the world as a startup was invariably Silicon-Valley centric. And yet, there are 480 startup ecosystems around the world.

No one was telling their stories.

So I decided I would. In my book Out-Innovate, I interviewed 200 founders that are leading some of the biggest and most successful startups around the world to share their lessons and thoughts and ultimately start a conversation about what it takes to build a successful business around the world.

EVCA: In your book, you say that frontier innovators are born global. What does it mean to be born global as an entrepreneur?

Alex: Outside Silicon Valley, the best entrepreneurs are born global. They do so in three dimensions:The first is they’re cross pollinators. Their ideas come from everywhere. Their businesses get better as they scale internationally. They have worked across industries. Immigrants, arguably the ultimate cross-pollinators are key players.

The second dimension is that they are multimarket from the get-go. I love the story of UiPath as an example. UiPath is in the Robotic Process Automation space. It was started in Romania. When I interviewed Daniel Dines, the CEO, he talked about the fact that his business was born in Romania was critical to its success because he had to build a business, a product, and a culture that could scale across markets from the get-go. And today, UiPath is arguably the fastest growing enterprise business of all times. It is out innovating its global competitors, including those in Silicon Valley.The third dimension is how frontier innovators build teams. With COVID, everyone all of a sudden thought about being remote and distributed. But a distributed workforce has been a matter of strategy outside of Silicon Valley. Global entrepreneurs build teams that take the best talent from wherever they are because they might not have access to the best talent locally.

EVCA: You wrote a chapter on how frontier innovators are creating industries, not disrupting them, which is the Silicon Valley approach. Could you elaborate more on the difference between what it is to be a creator versus be a disrupter?

Alex: In Silicon Valley, we have this obsession with disruption. You're either disrupting or being disrupted. This influences problem selection. That is, the problems that we select to tackle are those where there is an incumbent that's inefficient.Outside Silicon Valley, I've observed that the best entrepreneurs are by and large creators, not disruptors. What I mean by that is they do three things simultaneously. The first is they're offering a product or service that was previously not available in the formal economy. Sometimes they're formalizing an informal service. The second is they aren’t offering a top-of-market solution. They are producing something that starts off as mass market from the beginning. The third is they're often the shoulders of giants upon which other companies are built. Frontier innovators must often build the “full stack”--not just the actual front-end application but the infrastructure their businesses and products require. This in turn provides the enabling infrastructure for other subsequent companies.

EVCA: Silicon Valley startups operate on the mantra of high growth at the cost of high cash burn. From your book, that’s not how frontier innovators operate. Can you elaborate more on the approaches for startup growth and operations in frontier ecosystems?

Alex: In technology, it feels like everyone has an animal. In Silicon Valley, you'd say the unicorn is the animal, right? The unicorn is a business that's worth a billion dollars.

Outside Silicon Valley, the best entrepreneurs are operating in a tougher ecosystem with less capital, less resources, less depth of trained human capital, and more macroeconomic shocks. There, it is neither prudent nor practical to grow at all costs. And so, outside of Silicon Valley, the model that I propose is the camel. When times are good, they thrive – they can sprint across the desert and they can guzzle water faster than any other animal. But when times are bad, they can survive.  In my analogy, camels are businesses that still want to scale and build industry-shaking returns, but they do so differently. They think about sustainable unit economics from the get-go, thinking about the right pricing, managing burn of the business. They take a long term approach that builds resiliency into the business model.

EVCA: What I really liked about your book is that it challenged my conceptions about how to invest and what geographies to look at for good startups. For many U.S.- or Canada-based firms, for example, they only focus on North America. European firms typically only focus on Europe and maybe also Israel. Given this, do you think VCs are missing out and not looking at other ecosystems for investment opportunities?

Alex: Unequivocally. I believe that VC’s that are not looking at the rest of the world are missing out. It used to be that the action was in a handful ecosystems; that it was okay as the adage went to invest and be home for dinner after the board meeting.But no longer. There are 480 startup ecosystems around the world. Eighty-five of them have created billion dollar businesses. The proportion of billion dollar businesses built outside Silicon Valley is increasing every year. China alone is 30% of unicorns. So you have to think global, because the best businesses are going to get built from everywhere. If you only look at Silicon Valley, you will miss the best in the category from elsewhere.

Alex Lazarow has worked at the intersection of investing, innovation, and economic development across the public, private, and social sectors for more than a decade. He is a venture capitalist with Cathay Innovation and was previously with Omidyar Network. He is a Kauffman Fellow, Council on Foreign Relations term member, and an adjunct professor specializing in social-impact investment and entrepreneurship at the Middlebury Institute of International Studies at Monterey. He is a graduate of Harvard Business School and the University of Manitoba.