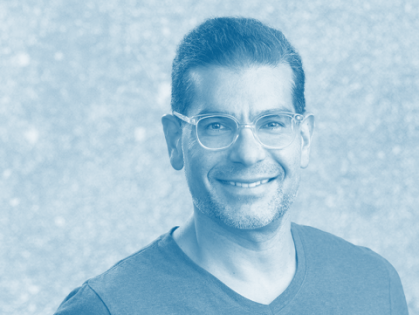 From Teenage Tech Tinkerer to Partner at Lux Capital, Shahin Farshchi Share His Origins Story and Lessons on Life

Shahin Farshchi is a Partner at Lux Capital, a venture capital firm that invests in cutting-edge emerging technologies. To talk to Shahin is to talk to a man in the state of constant evolution. Shahin’s been evolving ever since getting that first taste of the boundaries of the impossible when he was just a kid watching the futuristic worlds of Star Trek and Knight Rider. His evolution has taken him across many different trajectories, all of which--if he hadn’t stopped evolving--would have seen him in one of many possible paths he has explored in his past: a researcher at a renowned institution; an engineer developing the cars of the future; a startup entrepreneur.

Talking to Shahin, you get the sense that he has evolved so much over the years because of an acquired confidence in his ability to hack his way through new problems, new systems of knowledge, and even new environments. It’s his intellectual curiosity that’s enabled him, but it’s his defiance of self-limitations that’s taken him where he is today. Yet Shahin is also far more complex than just that. His confidence is grounded by the humbleness and perspective offered only by international experience--specifically, growing up in the Bay Area and moving to Iran in his high school years and then back to the Bay Area for college. His internationalism is what underpins his belief that “there is no particular rule for anything.” With no rules for anything, Shahin simply never stopped evolving. Indeed, for Shahin, only time will tell what he will evolve into next.

EVCA: What is your origins story? What did you do prior before joining venture capital?

Shahin: I grew up in the Bay Area. I always had a passion for cars, computers, and space, I watched a lot of Star Trek and Knight Rider growing up and wanted to grow up designing cars. My parents decided to move back to Iran when I was in high school, so during those years in Iran, I actually spent a lot of time taking cars apart and putting them back together for an uncle who had a mechanic shop. I came back to the United States for college and decided to do electrical engineering for my undergraduate degree at UC Berkeley.

Unfortunately, I graduated in the dot-com bust. It was a pretty, pretty abysmal time in Silicon Valley. I thought I'd take advantage of the opportunity to go somewhere else. I went to Detroit to work for General Motors. During that time, I realized that even though I have a huge passion for cars, I did not have a huge passion for being part of the car business or being part of the development of cars. Just being born and raised in Silicon Valley and having gone to Berkeley for undergrad exposed me to a very different culture, which Detroit didn't quite have at that time. So I came back to California and did a PhD in electrical engineering at UCLA. Like many naive PhD students, I decided to go out and start a company around my research, which was on miniature wireless brain recording systems for small animals. I learned the hard way that it's one thing to build really cool technology and another thing to have a real business, so I decided to shut that down and look for another business opportunity.

EVCA: After shutting down your first startup, how did you pivot into a venture capital role?

Shahin: I got a great piece of advice from a friend at that time, which was to get to know VCs before asking them for money. I knew that I was going to start another company, so I figured that the best way to go out and get to know VCs would be to go out to them bearing gifts. At that time, back in the early- to mid-2000’s, fabless semiconductor companies and chip companies were still interesting. So I reached out to a bunch of venture capitalists, saying, “Hey, if you're interested in doing semiconductor investments, I'm an electrical engineering PhD. I know semiconductors very well. I have a lot of friends that are starting companies and are joining interesting startups. I'd be happy to send deals your way.” A lot of VCs said “Sure, send us deals.”

Lux Capital at that time was raising a second fund and was very interested in branching out into semiconductors. I sent a few interesting deals to them, and when they closed that second fund, they asked me to join full time. I've been very privileged to watch the firm grow and see our realm of investments grow as well. I've been a partner at Lux for the past decade plus. In the early days at Lux, I spent most of my time investing in semiconductors. More recently, I've led investments in rockets, satellites, driverless cars, manufacturing, automation, computer vision, and AI. As a firm, we also invest in therapeutics, medical devices, surgical robotics, healthcare services, healthcare IT, and food tech. We are very, very delighted to be focused on the cutting edge, empowering great founders, and bringing feats of engineering to the mainstream.

EVCA: You went to high school in Iran. How has that international experience shaped who you are and how you approach investments?

Shahin: That experience gave me a lot of perspective. I grew up in a middle class neighborhood in the East Bay. My dad was a UC Berkeley graduate student when I was born, so I grew up in a nice town with a lot of other offspring of Berkeley students. Moving to Iran exposed me to a whole different universe of people and beliefs. What that taught me was that even though people on the outside may look different, may behave differently, may have different religions, and may come from different demographic backgrounds, they're all actually very similar in many ways. It was also a very humbling experience to see people who had far less resources achieve so much. I came back to the U.S. with the belief that people can achieve very much with very little. It gave me the belief that there is no particular rule for anything. There is no specific path or rulebook for achieving anything. It just made me very humble and made me feel very blessed and very lucky to have the privilege of going to school in the United States and have a professional career in the United States to what I'm doing. It also gave me confidence. Any challenge with the right amount of energy and discipline can be overcome.

EVCA: You have a very unique path--going the academic route as an electrical engineering PhD to venture capital. How has that shaped your approach to investing and differentiated you from other VCs?

Shahin: The academic background has given me the courage to spend time with entrepreneurs who are on the cutting edge. What you learn as a PhD is that you gain confidence in being able to learn anything. That helped me speak the language of a lot of these entrepreneurs who were doing very interesting things. Even if I was looking at a space that I wasn't an expert in, I felt as if I could understand what I needed to know in order to make a investment decision.

The academic background also created a little bit of a drag in a sense that I would find myself getting enamored by very, very interesting technologies to the point where I didn't put in as much rigor into the business side of things. I found myself spending more time on the scientific thesis more than I should on the investment thesis. It took some time for me earlier in my career to be able to balance those two sides out.

Overall, my time spent as an academic gave me a lot of tools to go out there and make up for any lost time I may have spent in academia to get a really good sense of things like founder dynamics, the importance of recruiting great people, and how to identify those kernels of what could be great companies that are separate from academic and scientific achievements.

Shahin: It's patience. This might sound counterintuitive, but this is a game that requires a lot of patience. If you expect to get the big step-up in income and title in a matter of two or three years, there's nothing preventing you from achieving that. But that should be something that comes naturally, as opposed to that being the goal. The goal that I think everyone should have in their earlier years is to learn to build out networks, to build out trust, create a profile, have an opinion, share that opinion with people around you, and become a magnetic force of great founders. If you achieve this, then naturally the step-ups in pay and the step-ups in title will come. But it's going to take a lot of time and a lot of patience. Those who I've seen around me succeed are the ones that focused on the former, which is attracting great people, as opposed to the latter.

EVCA: Where do you see yourself in ten years?

Shahin empowers visionary founders aiming to accelerate humanity and build a fantastic future through feats of engineering. He built brain- machine interfaces for his PhD in Electrical Engineering, hybrids at General Motors, founded a wireless vital sign monitoring company, and as a Partner at Lux, has funded chip (Nervana), rocket (Relativity), satellite (Planet), robotics (Covariant.ai), and driverless car (Zoox) companies. Lux is a $2.4B VC that invests in tomorrow’s transformational companies across healthcare and technology.