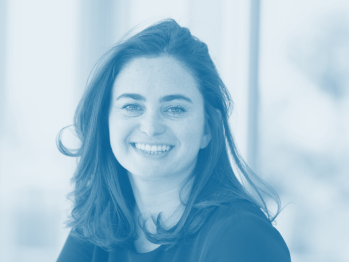 Sam Smith-Eppsteiner is a partner at Innovation Endeavors, an early-stage venture capital firm that invests in visionary founders, transformation technologies, and emergent ecosystems for a new world. Sam is the archetype of the compassionate leader. When she matriculated into Stanford University as an undergrad, she approached her studies with a hunger for intellectual stimulation that eventually saw her winding up in management consulting at Bain upon graduation. Unlike many of her peers, Sam had not intended the management consulting route.  She always had contemplated going into something impact-oriented, but, three years into management consulting at Bain, she was pleasantly surprised that the gig had opened more doors than it had closed. The management consulting world, moreover, had given Sam her first taste of working in the impact sector. In her last year at Bain, Sam externed in Rwanda at a mushroom company called Kigali Farms, a social enterprise that sought to scale sales of the prized oyster mushroom while improving the livelihoods of the local farmers. That role had a significant impact on Sam, who left the experience with the hardening feeling that businesses that prioritized economies of scale over core social goals were more apt to generate broader impact. With that first experience in the impact sector under her belt, Sam next landed at Innovation Endeavors. She worked there for two years before leaving for Stanford for her MBA. After grad school, she returned to Innovation Endeavors--this time as a partner.

Talking to Sam is effortlessly easy. In her interview, she reflected on her life with the type of openness and authenticity that can only follow a genuine state of self-contentment. She’s someone who fell into the lucrative profession of venture capital, not for the money but for the intellectual challenge and opportunity to solve real-world problems. Ever since she was young, Sam has been on the constant search for making a positive impact around the world, and, at least for the time being, venture capital is her current instrument to effect that change. Indeed, with her core expertise in the areas of manufacturing, food and agtech, and climate-tech, she invariably approaches her investments with an eye toward moving the general human population closer to a more sustainable future. As for what she enjoys spending her recreational minutes on, Sam’s list of favorite activities includes running, yoga, cooking, reading, and backpacking in the great outdoors. With a note of self-humor, she is aware that she could not be more prototypically San Franciscan with such hobbies. However, to Sam’s credit, her unshakeable San-Franciscanness only adds to her unique brand of charm.

‍Samantha at the EVCA: What was your pathway into venture capital?‍

Sam: I would say my journey to venture capital was unexpected and unplanned. With two lawyers for parents, I didn’t know much about other potential paths. As a result, I got here a bit circuitously. At Stanford, I considered everything from medicine and architecture to the more likely paths of a PhD in Political Science or law school. What I did know is that I really liked being challenged. I’m energized by solving hard, intellectual problems and wanted to do something that would have an impact.

After undergrad, I wound up at Bain doing management consulting. I learned a lot from the role - from what EBITDA means to how to run diligences, work with teams, and interface with different types of people. It ended up being the fast track to lots of other potential opportunities, opening more doors than closing them. In looking for more focused social impact after Bain, I did a six-month externship in Rwanda, working for an agtech social enterprise, Kigali Farms. My hope was to gain operating experience that I could bring to future impact investing roles. That experience was wonderful and formative, but it also made me question the potential scalability - and thus impact - of a lot of social enterprises. I found myself curious and optimistic about the potential for technology to solve important, intractable problems at scale, so I started looking into venture capital more proactively.

I was drawn to Innovation Endeavors for its focus on marrying emerging technologies with large, real world industries. I felt there was incredible potential to transform industry for the better and build enduring businesses in doing so, and so far, so good. I worked there for two years before heading back to Stanford to obtain my MBA. Upon graduation, I returned to Innovation Endeavors as a Partner.

Samantha at the EVCA:  What areas of venture capital investment get you excited?

Sam: I continue to be energized by companies and visionary founders who are tackling meaningful problems in the world through technology. I split my time between three main areas. The first is all things industrial, which includes manufacturing supply chain, construction, and materials; the second is agtech, food, and industrial biology; and the third is climate tech, which includes both the decarbonization of industries in which we’ve always spent time, as well as work in energy, climate risk, and the carbon economy. There is a huge opportunity to bring emerging tech - like ML/AI, robotics, and other advanced engineering methods - to bear in these under-served markets. In doing so, I think we can generate significant human, planetary, and financial impact

Samantha at the EVCA: Looking back at your career, what lessons have you learned that you would impart to the next generation of venture capitalists seeking to grow to the next level in their careers?

Sam: What has best served me is approaching all things with a really deep curiosity. When I first joined Innovation Endeavors, I’m sure I overwhelmed Dror, the firm’s founder, with the myriad questions I had: how we thought about check size, the right level of engagement with portfolio companies, cap table structures, etc. I wanted to understand everything about the VC space and Innovation Endeavors’ strategy within it. That curiosity enabled me to learn more, think from first principles, and play a more strategic role within the firm.

The other thing that has helped me along the way is taking an owner’s mindset. I would encourage this proactive mentality in everything from firm operations and portfolio support to sourcing, diligencing, and winning deals. There’s also no “right” way to do venture; there are a million different ways to be exceptional at this job. Leaning into your own personal strengths is a way for you to become effective — whether that’s networking and hosting events or deeply researching a space.

Samantha at the EVCA: What's your least favorite part of the venture capital role?

Sam: I hate passing on companies. I really admire founders. They’re obviously putting their life and blood, sweat, and tears into their companies, taking huge risks to tackle meaningful problems. But, as a firm, we have a concentrated philosophy and make few significant investments per year. The benefit of that is that I get to be incredibly selective about what I look at and the teams I work with. The downside is that I need to pass on the vast majority of founding teams we meet. I just hate disappointing founders in that way.

Samantha at the EVCA: In an industry where only 12% of decision makers at firms are women, what has been your strategy for operating and leading as a woman in venture capital?

‍Sam: I’m part of a great team that has been incredibly supportive, so thankfully I don’t have to think about gender bias too much within the context of the firm. However, I have a couple thoughts here. The first is that I surround myself with friends and peers in this world, especially women. I started a very casual group of “VC women and wine” in my apartment before COVID and co-captain an All Raise partner cohort. There’s a lot of value in just creating connections between women in this space. This includes not only mentorship and guidance but also the more practical stuff like sharing deals, hiring, and putting yourself in a position to be an excellent investor through your relationships. Secondly, I try to use my position and gender to help my portfolio companies think more about diversity, equity, and inclusion as well. I’m often the only female board member involved in my companies, and one of the first things I’ll do when I join a board is to look at the gender diversity of the company and help founders think through why that’s the case and how they can improve it. I hope to use my position to continue to support women throughout the tech ecosystem.

Samantha at the EVCA: Where do you see yourself in ten years?

‍Sam: I really love what I do. I think I’ve already bucked the trend across my business school classmates, where role changes are frequent in the first year or so out of school, by returning to Innovation Endeavors and going on five years with the firm. I love the role, I love the team, and I love the kinds of companies and founders I get to work with. In ten years I wouldn’t be surprised to find myself right where I am now.