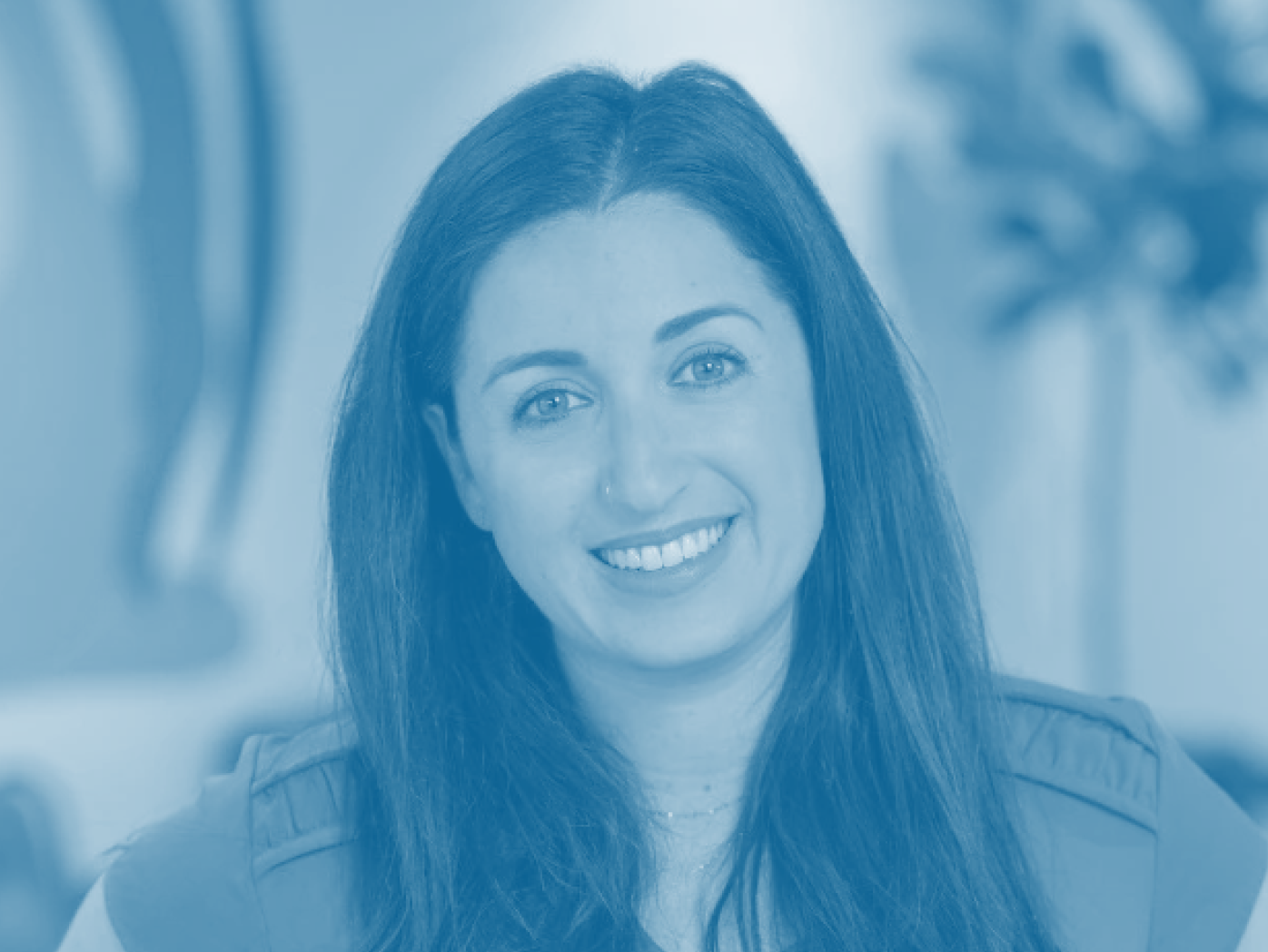 By
Sam Huang
,
Principal at BMW i Ventures

Stephanie Cherrin is a partner at J.P. Morgan Technology Ventures, the venture capital arm for the global investment bank J.P. Morgan. Stephanie has that type of magnetic authenticity that draws you in from the first moment you meet her. When asked about her road to venture capital, she half-joked that she had one of the most nontraditional paths into the venture capital world imaginable. At the age of 18, Stephanie, a Bay Area native, moved halfway across the world,  whereupon she completed two degrees in counterterrorism and security--one from a university in Israel and the second from King’s College, London. After realizing that a career in the security industry was not what she had imagined, she landed in Israel’s tech scene, eventually joining as the first hire of an emerging Israel-based fund. That first role whetted Stephanie’s early appetite in startup investing, serving as the initial springboard for her subsequent investment roles at the corporate venture capital groups of Deutsche Telekom and later Porsche Ventures when she moved back to the U.S. Stephanie’s most recent chapter, investing in growth tech startups for J.P. Morgan Technology Ventures, represents the culmination of her diverse experience set and enterprising ability to navigate and flourish in any environment she happens to find herself in.

For someone who works at the upper echelons of one of the world’s most prestigious financial institutions, it may come as a surprise that Stephanie is one of the most down-to-earth people you should ever meet. She combines a razor-sharp wit with a self-deprecatory humor that can only be described as utterly charming. Stephanie is the kind of person who opens her house to you and your family, with no expectations other than to share a meal and learn further about each other as humans. That is because Stephanie understands that that whole ordeal called life--even more so than venture capital--is a human-oriented enterprise. With two kids and a startup-founder husband, she is a staunch advocate for the working mother. She is living proof that a woman’s identity does not have to be confined to mutually exclusive spheres of career versus motherhood. Someone as ambitious and determined as Stephanie would never settle for anything less.

Stephanie: I have one of the most non-traditional paths to venture capital imaginable. I have two degrees in counterterrorism and security--one from a University in Israel, and the other from King’s College, London. After realizing that working in security wasn’t a good fit for me for so many reasons, I spent my first few years out of college exploring different roles. My first job was as an analyst at a company called Brightwire. While that role taught me the basics of finance, that company ultimately went bust after a year and a half, so I had to find something else. I ended up landing in online marketing for an ad tech startup in Israel. While I was there, I got to know this guy who worked three floors down from me in the same office building. He was an ex-investment banker and was launching his own venture fund called Krypton VC. One day he turned to me and said something along the lines of: “Well, you seem smart. You speak English. Do you want to work together on this fund?” At that point, I knew zero about venture capital. However, he took the risk on me, and together we built the fund from scratch. He showed me the ropes--how to build a fund, how to source deals, how to talk to founders and investors. He gave me a lot of autonomy because we were such a small operation. I was able to get very operational hands-on experience working with founders and how to run a fund from scratch. The role provided me a unique kind of exposure that allowed me to get my first foot into the venture capital door.

Sam: After breaking into venture capital at Krypton, what was the next stage of your journey? How did you ultimately land at your current position as partner at J.P. Morgan Technology Ventures?

Stephanie: When I was still in Israel, I met the guys from Deutsche Telekom who were seeking to launch an early-stage fund. I joined them as their official person on the ground, representing their early-stage investing on behalf of Deutsche Telekom. That was a big transition from the type of B2C investing I had done at Krypton, and I had to go through a really expedited learning-as-you-go kind of process. I had to learn how to be extremely self-sufficient and how to manage my own deals, my own pipeline, my own ecosystem. But it was an amazing role because I got to meet the most incredible people, both in Israel and Europe, and had the opportunity to travel between Berlin and Tel Aviv regularly.

After three years at Deutsche Telekom, I moved back to the U.S. and joined the venture firm NFX as Head of Network. Being Head of Network allowed me to really get to know the ecosystem out in Silicon Valley. Coming from Israel, I had to learn fast through a lot of awkward experiences after realizing that the U.S. tech ecosystem does not work the same as it does in Israel. Here, in the U.S., there is a lot more ego. People care a lot about your pedigree, who you know, and where you went to school. Because I spent my young adult and adult life in Israel, I couldn’t identify with a lot of these values, and I simply didn’t have access to a lot of these institutions and people. It was a little off-putting in the beginning, but just like I learned how to navigate my life in Israel, I figured out how to navigate here.

I was ultimately fortunate enough to meet the guys from Porsche who were opening up yet another German corporate venture fund, but this time in America. I joined the Porsche Ventures team as their first full time investor with an MD that came over from Germany. Looking back, I had quite often found myself in the building phase of different funds--whether they were run by emerging managers or some of the most established corporations in the world. After being with Porsche for three years, I met the team at J.P. Morgan who were doing the same thing—a year into launching a new fund to invest in early growth startups. Our chemistry, values and experience were very synergetic. At J.P. Morgan, we operate like a venture capital fund within the investment bank. I realize that my path to my current position has been very nontraditional, but that it was my nontraditional path that really has allowed me to feel comfortable flourishing in all these different environments. It has been a very rewarding experience.

Sam: Looking back at your career, what key lessons have you learned that you would like to share?

Stephanie: There’s two lessons that I would share. The first is don't overestimate the job description. A lot of times people don’t apply to a certain job because they might not fit every requirement in the job description – I think we as women tend to do this more. Personally, I’ve never applied to a role based on a job description. In fact, I don’t think I’ve ever actually applied for a job. Rather, surround yourself with people who really believe in you and cultivate those relationships so that they want to advocate for you. When the time comes for when that person is looking for someone to join their team, your advocate will step up and say “Wait a second, I have the perfect person.”

My second lesson is that you as an investor cannot discount the extent to which your personal relationships play. The more transactional you are, the less people are going to work with you. In the venture capital industry, you want to work with people you like; you want to invest alongside people you get along with; you want to sit on Boards with people you respect. Venture capital is such a human-oriented game. Investing in your network in a non-transactional way is so much more important than sitting and being able to read a financial model. Learning how to lean in on a human level into your network is absolutely key. Your authenticity and genuineness is so much more important than people even realize.

Sam: I’ve always been amazed at your ability to juggle two children and a career. What advice would you impart to persons seeking to balance the demands of both career and potential parenthood?

​​Stephanie: I have two kids and am a young mom by at least San Francisco standards. I’ve always felt that there was a stigma around motherhood. I’ve heard so many women express that they can’t have kids because they enjoy working and don’t want to slow their career. Personally, I’ve never in my life felt that I needed to make the choice between my career and motherhood. Building a strong identity both as a parent and as a professional are both important parts of my life. Of course if you don’t want to have kids, that’s an awesome choice as well. It’s just important to know that having children does not mean the derailing of your career. I’m extremely career-oriented, and having kids has not derailed me from that mission at all. My kids know that I work. They know that when they go to the school or are with the babysitter, that I’m working. On the weekend and in the evenings though, I am always there for them. Because I have two boys, I in some ways felt like I had more to prove. I want my boys to know that it’s not just their dad that works but their mom as well.  It doesn’t even occur to them that we would be doing anything else. That equalizing effect of having both parents--mom and dad--work is so important for my children to see.

I really advocate for young parents to have children as early on in their careers as possible, especially if you can get the support system around you. It doesn’t get any easier and you never get any less busy. It’s much easier to juggle a job and kids when you’re younger and have more energy. If you stay up an hour or two later at night on your computer because you spend a little bit more time with your kids, it’s still worth it. The question should be not whether you have kids or not but how you should manage it. Career should never be the obstacle.

Sam: Where do you see yourself in a decade, two decades from now?

Stephanie: I’d be really happy if I just kept growing. Today, I can finally say that I love my team, I love my position, I love my job, and I love the organization I work at.. I have a great husband and two kids right now, and I’m going to have more. If all this goodness keeps growing and building on itself, I would be really happy 10 years from now.