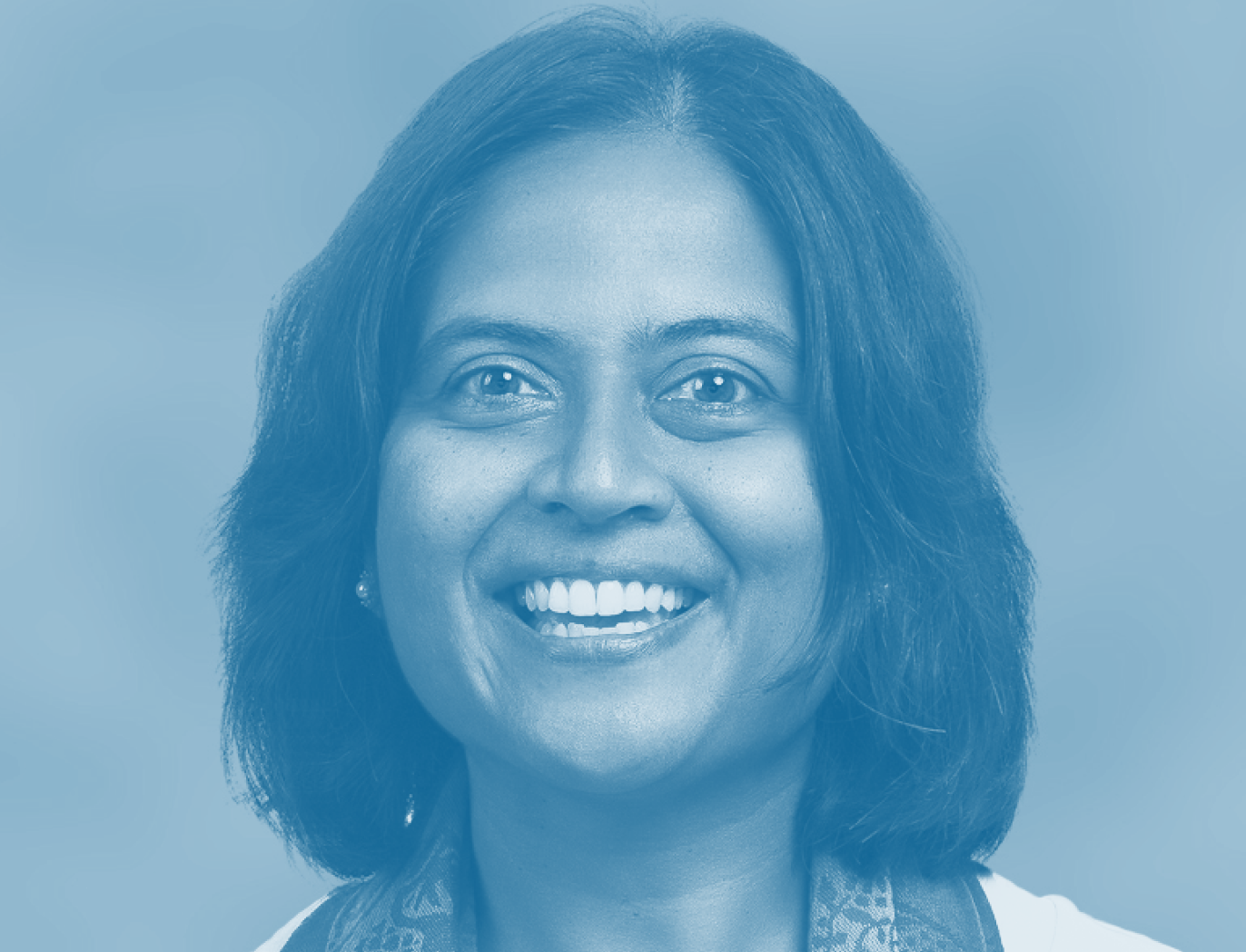 Vidya Raman is a Partner at Sorenson Ventures, an early-stage VC firm focused on accelerating cutting-edge innovations in the software and security sectors. Vidya is a venture capitalist with the heart of a builder. Her first job was as a software developer, where she spent her time hammering out lines of code, creating magic out of Boolean logic. After getting an MA in Biomedical Engineering and an MBA from Duke University, she entered into product management, landing her first gig as a product manager at the healthcare-tech company Medtronic. Over the years, she would go on to work at some of the most promising startups in the industry, helping founders turn their ideas into productized realities. By the time she decided to take the leap into VC, Vidya was Director of Product Management at the tech darling Cloudera, with over a decade of product experience under her belt. Determined to forge her new career path, she quit her job with nothing lined up. It was a brave leap of faith, but Vidya, who had been known for her determination as a child, landed at Sorenson Ventures, where she is now a partner.

Vidya is what society should hope to see in today’s generation of venture capitalists--utterly ambitious and intelligent, coupled with an empathy that makes her the generational antithesis to the “old boys’ club” in tech. She is a humanist at the core. You can discern it in her mellifluous manner of speaking, her measured way of reflecting back on her past struggles as much as her successes with utter candor. In conversation, she becomes most electrified when speaking about meeting founders. She cares deeply about improving diversity across tech and has committed to taking every first meeting with any enterprise startup with an underrepresented founder. In her free time, Vidya gravitates toward nature. While she grew up in South India, where the summers are scorching hot, she nowadays prefers to explore more clement environs in her backyard across the Bay Area. Her other favorite pastime remains reading. Lately she has been immersing herself in travelogs but sometimes still finds herself dreaming in the world of Harry Potter. Vidya, while perhaps too humble to recognize it, is a role model for a changing VC industry that prioritizes the core values of empathy, authenticity, and diversity. Vidya’s on the mission to change the tech industry for the better, and you can be sure that she will succeed, one investment at a time.

Sam: You have a very unique background working in software development and then product management before becoming a venture capitalist. Could you share some more insights about that early part of your career?

Vidya: I started my career working as a software developer. After some time, seeking to have a greater meaningful impact with my career, I contemplated entering the healthcare field, which led me to pursue a PhD in Biomedical Engineering. I quickly realized, however, that I was more interested in the commercial applications of scientific advances than actually pushing those scientific advances myself, so I dropped out of the program with a Master’s degree. I subsequently went to Duke University for business school.

After business school, I became a product manager at a healthcare company. Very quickly, however, I became disillusioned once I understood the big impact that healthcare economics actually had on healthcare delivery in the U.S. Realizing that my social impact would be limited if I stayed in healthcare, I ventured into cleantech. I started working at a Silicon Valley cleantech company called Silver Spring Networks as a Product Manager. From there, over the years, I worked at different startups, helping build products from scratch and seeing them through to product market fit. I was Director of Product Management at eMeter Corporation, an IoT startup that Siemens acquired. I also served as Director of Product Management as Cloudera. Throughout this journey, I realized that I had a strong affinity for technical founders who understood the business from a first principles standpoint and needed help commercializing those ideas. At the time, I did not yet know about venture capital. For someone like myself, who was not a former consultant or banker, I did not know what role I would play in that industry. Only by accident did I start noticing many former technical founders starting venture firms of their own. That led me to start doing some research and looking into different venture firms, ultimately realizing that someone with my background in product management could be an asset in the venture capital industry.

Sam: After realizing that you wanted to enter the venture capital industry, how did you ultimately land at Sorenson Ventures, where you are a partner today?

Vidya: When I decided to explore career opportunities in venture capital, I was told by multiple people--VCs included--that I was too old. They gave me all kinds of reasons why I should not pursue a career in venture. I took all of this very seriously, but I never let these comments stop me. In fact, what I did was quit my job. I wanted to put all the focus and effort I could on finding a position in VC, and I told myself that I would give myself a year to explore this. If things didn't pan out, I thought, I could always go back to what I was doing. So I quit my job as Director of Product Management at Cloudera. I had nothing lined up. I was scared, but I felt comfortable enough to take that next step.

After that decision to leave Cloudera, things were very “roller-coaster.” I didn’t know what VCs wanted to see in a new hire. Initially, I was very intimidated when I met with VCs because they were so succinct in introducing themselves and their firm. They could pack a whole spiel in 30 seconds. It was intimidating--at least until I realized these guys were pitching themselves like 10 times a day. I eventually got the hang of things, but it was initially very rough. I had to figure out how to position myself and sell my story. But I kept trying. I went from one conversation to the next with different VCs, refining my pitch with each conversation. Ultimately, I was very lucky to be introduced to the folks at Sorenson Ventures through a serendipitous contact. I ended up joining their team in 2019.

Sam: What lessons would you impart to the next generation of VCs as they embark on their careers?

‍Vidya: The first thing I would tell VCs early in their career is to prioritize learning over everything else. I have met a lot of emerging VCs who are obsessed with the promotion to partner. This was a concept that I have always found a little foreign to me, given that I came from the operating world. In the operating world, not everybody wants to be CEO in a company; however, in venture firms, it seems that everybody wants to be a partner. This fixation on “making partner” misses the importance of cultivating the right mindset as a venture capitalist to learn and become good at the things essential for long-term success. My philosophy is that if folks prioritize learning, networking, and developing other skills necessary to become a successful venture capitalist, then the promotion to partner will become automatic. To succeed in venture capital, you need to build a solid foundation for your career. Rather than having a single focus on making partner, the question you should ask yourself is what do you need to do today to become the best in your stage and sector. After all, becoming a partner does not automatically make you a very successful VC. If you focus on the foundational skills of venture capital, then one day you will forge your path to become a partner.

Sam: What is your favorite part of venture capital? What makes you excited to come to work every day?

Vidya: One of my favorite parts of the job is the impact that I can have on the founders of our portfolio companies. The founder journey is full of ups and downs, and I enjoy being there for our founders each step of the way. This includes figuring out whatever helps progress the business forward--whether assisting with hiring, providing advice about the business, making intros to others, and so forth. That is what drives me day to day. It’s the positive impact that I can have on founders.

Finally, a third thing that excites me about my work is the energy I receive when meeting entrepreneurs who have a world vision that very few other people have but who are so sold on that vision. I find their energy infectious. I definitely do love talking to founders. Even if I can’t invest in everybody, just speaking to entrepreneurs is very, very energizing.

Sam: Where do you see yourself in ten, twenty years? What do you hope to have accomplished by then?

‍Vidya: This is a question I ask myself very often. The thing that I want to accomplish in life is to be a great role model for my kids and women in general--whether that’s professionally or personally. I would love to be able to support more women entrepreneurs, specifically those who tend to be in sectors that are male-dominated like infrastructure and cybersecurity. If I’m able to do that, I would consider that a huge win.